In 1900, Bishop Burke (Bishop of the Diocese of St. Joseph) invited the sisters from the Religious of the Sacred Heart to open a parochial school. He offered them the grounds east of the Cathedral Church. The cornerstone, dated April 29, 1901, was dedicated in May.

By September, when all schools were starting classes, the Cathedral School building was still under construction. Classes for 175 children were held in the basement of the church. The new school building was ready for occupancy in October 1901. The building was a three-story structure. During those first years, the boys occupied the first floor, the girls were on the second floor and the auditorium/gymnasium was on the third floor and had a seating capacity of 500. To the south of the school, the sisters had a convent built. It was joined to the school by a covered walkway that was screened from the street by a lattice. Mother Delphine McMenemy was the superior of the school. There were 190 students at the end of the first school year.

In 1904, the school added high school classes. These classes operated on a portion of the second floor and on the third floor of the building. By 1912, there were 340 students in the grade school and 65 students (all girls) in the high school.

The Sacred Heart Academy Boarding School, which had been operated by the Religious of the Sacred Heart since 1853, closed in 1916. In 1919, the decision was made to reopen the Academy. The Cathedral high school classes were removed from Cathedral and added to the Academy. Sacred Heart then withdrew their association with Cathedral. Bishop Burke invited the Benedictine Sisters from Mount St. Scholastica to run Cathedral School and they accepted. In 1920, the Bishop asked Father O’Neill to head a fund drive to purchase the convent and school from the Religious of the Sacred Heart. He raised $44,000 in three days. The Bishop was able to buy back the property and open the doors of Cathedral School.

While Father Ruggle was pastor, a PTA (the Cathedral Education Association-CEA) was formally organized. Music became a daily subject in the school under the direction of Walton Smith. In 1947, Mr. Smith composed the school song, ―Hail, Cathedral‖ which is still played today. Plans were under way to remove the massive but decaying third floor that housed the auditorium/gymnasium. It was finally removed in the 1940s. Father Ruggle did away with school uniforms in the late thirties or early forties.

In 1952, Cathedral hired its first lay teacher for regular classroom studies when Mary 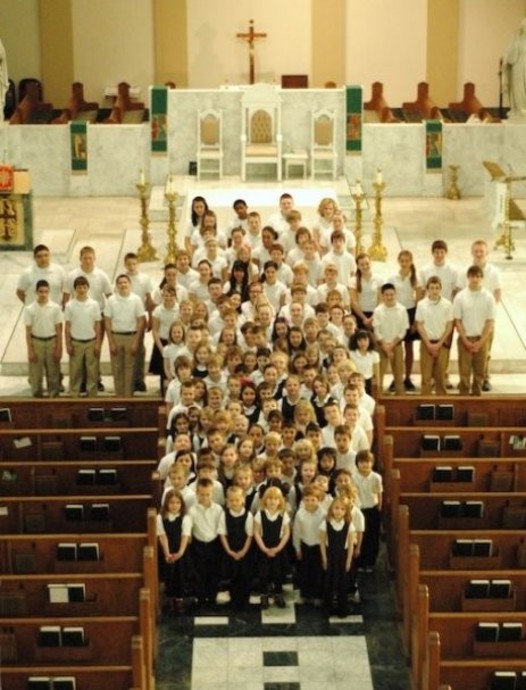 Rump Glenski was hired. In the 1950s, it was decided that more classroom space was needed. A capital funds campaign was started. The added classroom space was provided by a modular classroom building located between the school and the convent. An auditorium/gymnasium was built across the street from the church in 1956.

Also in 1956, it was announced that the two dioceses, Kansas City and St. Joseph, were to merge. Because there was a Cathedral in Kansas City, St. Joseph’s Cathedral became Co-Cathedral. When the school year started in 1958, electronic tape teaching was introduced. In 1964, the school enrollment totaled 640 students. Principal Mary Coleman, at the request of the CEA, instituted school uniforms again in the 1960s.

Over the years, lay teachers began outnumbering the religious. In 1970, there were twelve lay teachers and five religious. After a 41-year absence, Kindergarten was reinstated. In 1981, Heartland West started operating a daycare facility in the convent building. Basil Hoehn became the first lay person to be principal of Cathedral School in 1984. In the mid-1980s, the preschool program was started and Cathedral Parish took over the operation of the daycare facility.